China has been investing heavily in Latin America’s natural resources and crude oil. Recently, the country even pledged to invest $250 billion over the next decade to strengthen its presence in the region, and compete with the U.S. But this increasing Chinese trade and investment in Latin America is also increasing environmental and social conflict, finds a new report published by Boston University.

“The press is full of stories about what China’s rise to the world’s largest economy means for Latin America,” Rebecca Ray, Research Fellow at Boston University’s Global Economic Governance Initiative, and co-author of the report, told mongabay.com. “So the time was right to take an evidence-based approach to the topic.”

By analyzing data from eight countries in the Latin American region, researchers looked at whether China has indeed been an independent driver of social and environmental change in Latin America and the Caribbean, and if the performance of Chinese investors differed from other international investors in the region.

According to the report, the Asian giant’s impact on Latin America’s environment is far greater than that of other investing countries. Exports from Latin America to China – which are concentrated in sectors of agriculture and extractive resources like oil and gas – use about twice as much water, compared to overall exports, according to the report. In 2012, for instance, Latin American countries exported about 100 billion cubic meters more water to China than was imported. This is nearly the volume of Lake Nicaragua, the report notes.

“These differences set the stage for potential conflicts, as mines and plantations for export to China compete with surrounding communities for water,” Ray said. 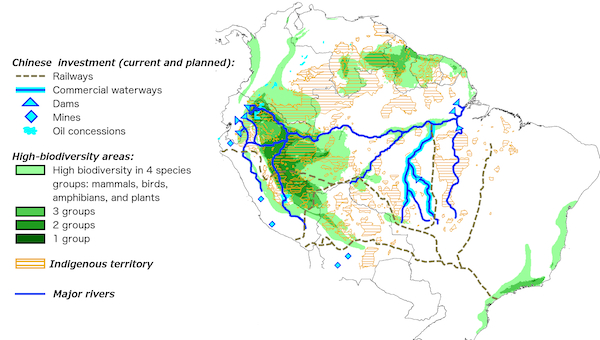 The report states exports to China also emit more than 12 percent greenhouse gas per dollar, when compared with other exports. Greenhouse gas emissions increase further if deforestation for the purpose of commodity transport is considered. A study in 2012 found that nearly 80 percent of Latin America’s deforestation, occurring in Brazil, Argentina, Paraguay, and Bolivia, was closely associated with export-related agriculture.

Moreover, these exports support fewer jobs than the overall exports from the region. So as China’s share in Latin America’s exports increases over the next decade, local employment benefits will go down, the authors note in the report. Overall, Ray explained, China’s economic activity affects Latin America in three major ways. First is through Chinese investors. Second is the boom in commodities that Chinese demand creates, often resulting in increased production of commodities even without Chinese investors. And third is through Chinese financing of Latin American infrastructure projects.

For instance, researchers in Brazil found that Chinese investment has been a major driver of deforestation of the Amazon forest, which in turn opens up the forest to human encroachment and affects movement of wildlife. These investments include Chinese-funded roads, canals and railroads to move goods to ports. Chinese demand for soy, too, has resulted in large-scale clearing of Cerrado savannah in Mato Grosso, Ray said. The Cerrado is one of Brazil’s most threatened ecosystems.

Overall, Brazil’s deforestation rate has declined significantly, with a 70 percent drop in its Amazon deforestation over the past decade. However, recently released data for 2014 indicates that downward trend may be ending. According to figures from Imazon, a Brazilian NGO, the number of 2014 forest alerts was well more than double that of 2013.

In Ecuador, too, Ray said damage is likely to begin soon. “The country has opened up new oil concessions in some of the most biodiverse land in all of South America, in order to ensure the success of the new Refinería del Pacífico, a project run jointly by Ecuador, Venezuela, and China,” she said. “Two of those new concessions will be run by Andes Petroleum, a joint venture between two Chinese state-owned oil enterprises.”

The impact of Chinese investment in the different Latin American countries, however, varies. This is in part because the host countries have different environmental and regulatory standards. Moreover, there are differences in the way the countries enforce these standards.

“Latin American countries have some very impressive environmental and social standards – often significantly higher than China – but enforcing these laws can be much harder than enacting them,” Ray said.

Countries like Peru and Bolivia, for instance, have high regulatory standards when it comes to consultation with local communities, according to Ray. Similarly, Ecuador applies higher environmental and labor standards to projects that have been rejected by majority of the community. But the pressure on the governments to approve new projects is also tremendous, Ray said.

“Every day that a mine or oil field is shut down for environmental cleanup, and every day that a new project is postponed to make sure that the Environmental Impact Assessment is sound, or that the indigenous consultation process has been fair, is a day that the government is going without royalties from that project,” she added. 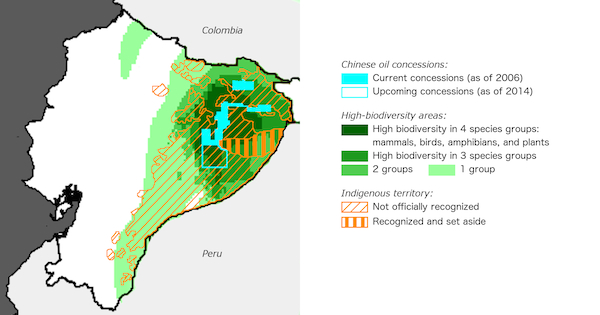 Countries then find it easier to cut corners to make sure that the projects go ahead. For example, for the new oil concessions in Ecuador, the government didn’t get a majority opinion of the local community, Ray said. Instead they got the approval of just a few leaders.

But the picture’s not all grim. Despite the varied environmental standards and their degrees of enforcement, the researchers found that some Chinese companies were willing to meet the standards. This sets them apart from some of their western counterparts, Ray said, who sometimes have shorter-term goals and are willing to cut corners to meet quarterly earnings goals.

For example, a Chinese-owned mine occurs at the border of the Tropical Andes Biodiversity Hotspot in Peru. When the company, Chinalco, inherited the mine in 2007, it voluntarily took on helping the Peruvian government relocate the 5,000 residents of Morococha, a city near the mine whose water supplies had been polluted by decades of mining activity. In addition to clean water, the new city, “Nueva Morococha,” promises to have improved infrastructure such as a modern water and sanitation system. The report notes that this is considered to be the first case of “voluntary, participatory community relocation in modern Peruvian history.”

“It is very important to point out, though, that this does not mean that Chinese investors are always saints,” Ray added. “But rather that our research shows that if local governments are willing to prioritize their workers, their human rights, and their environment, by setting high standards and following through on those standards by applying the law, Chinese investors have shown that they are willing to live up to them, to do what it takes to continue to have peaceful, long-term relationships with the central governments of their host countries.”

So the Latin American governments need to step up their games, Ray said, and ensure that their environment and people are protected.

“I see hope in the way environmental, indigenous, and labor leaders are learning from what is working in other Latin American countries, and seeking to make contact with the policy banks in China so they can tell them when there are violations of China’s regulations and guidelines on the environmental performance of outbound investment.”

Chinese investors, too, are learning from their earlier failures. Some Chinese companies, for instance, have taken a lead from the past conflicts surrounding oil in Ecuador and mines in Peru, and have taken steps to reduce conflicts with local communities.

“But there is still tremendous work to be done,” Ray said.

“The relationship between Latin America and China will not be sustainable if governments take a hands-off approach and leave the environmental and social effects to chance,” she added. “But if those same governments step up to the challenge, they have much more leeway to set the ground rules of engagement than they did in previous relationships with powerful partners.

“In sum, it is up to Latin American governments to make sure this relationship serves the needs of people and planet. They have both the opportunity and the responsibility to do so.”

This article was produced under the Mongabay Reporting Network and can be re-published on your web site or blog or in your magazine, newsletter, or newspaper under these terms.

A Green Future or Has Time Run Out?

Chinese Infrastruc ture Cooperation in Latin America and the Caribbean

Only a third of the tropical rainforest remains intact