Your signature needed! Global Statement on the 20th Anniversary of the UN Declaration on Human Rights Defenders

The 9th of December 2018 marks 20 years since global leaders adopted the Declaration on Human Rights Defenders. This was a major victory for the human rights movement as the international community finally gave due recognition to those brave individuals who devote their lives to fighting for all of our rights. The Declaration is an inspirational text that upholds the rights of all HRDs to promote, protect and defend human rights, from individual to global spheres. It affirms that states have a responsibility and duty to protect defenders against violence, threats, retaliation and arbitrary actions resulting from the exercise of the fundamental rights of defenders. The Declaration notes that when these rights are violated, victims have the right to file a complaint and such complaints should be reviewed promptly by independent, impartial and competent judicial authorities and that redress is made to the victims.

Unfortunately, twenty years after its adoption, our assessment shows huge gaps in the implementation of the Declaration. Evidence of this is the persistent attacks on HRDs and their organisations that continue unabated, 20 years after the Declaration was adopted. In all types of political systems, democratic and otherwise across the world, the settings in which human rights defenders work is becoming more contested and volatile. Very few states have promulgated laws on HRDS or developed policies that seek to recognise and protect them. Some of those who have are; Burkina Faso, Brazil, Cote d’Ivoire, Colombia, Mexico and Mali. Even in some of these states HRDs are at risk.

The undersigned civil society organisations express our deepest concerns over the challenges of HRDs. Our monitoring of the situation facing HRDs shows that those at the forefront defending, promoting and protecting human rights are prime targets of attacks perpetrated by state and non-state actors. The CIVICUS Monitor, a tool used to track the state of civic space in countries around the world reveals that the arbitrary and unlawful detention of HRDs is the number one tactic of repression used by states. Between June 2016 and March 2017, 160 reportsrelated to the detention of HRDs was published by the Monitor. Most HRDs are detained under restrictive legislation and are prosecuted under trumped up charges ranging from “terrorism,” “secession,” “drug trafficking,” “treason,” to attempting to destabilise the state and national security. These charges often carry heavy penalties including the death penalty and life imprisonment and in some cases judicial processes are flawed and HRDs are tried in military courts. 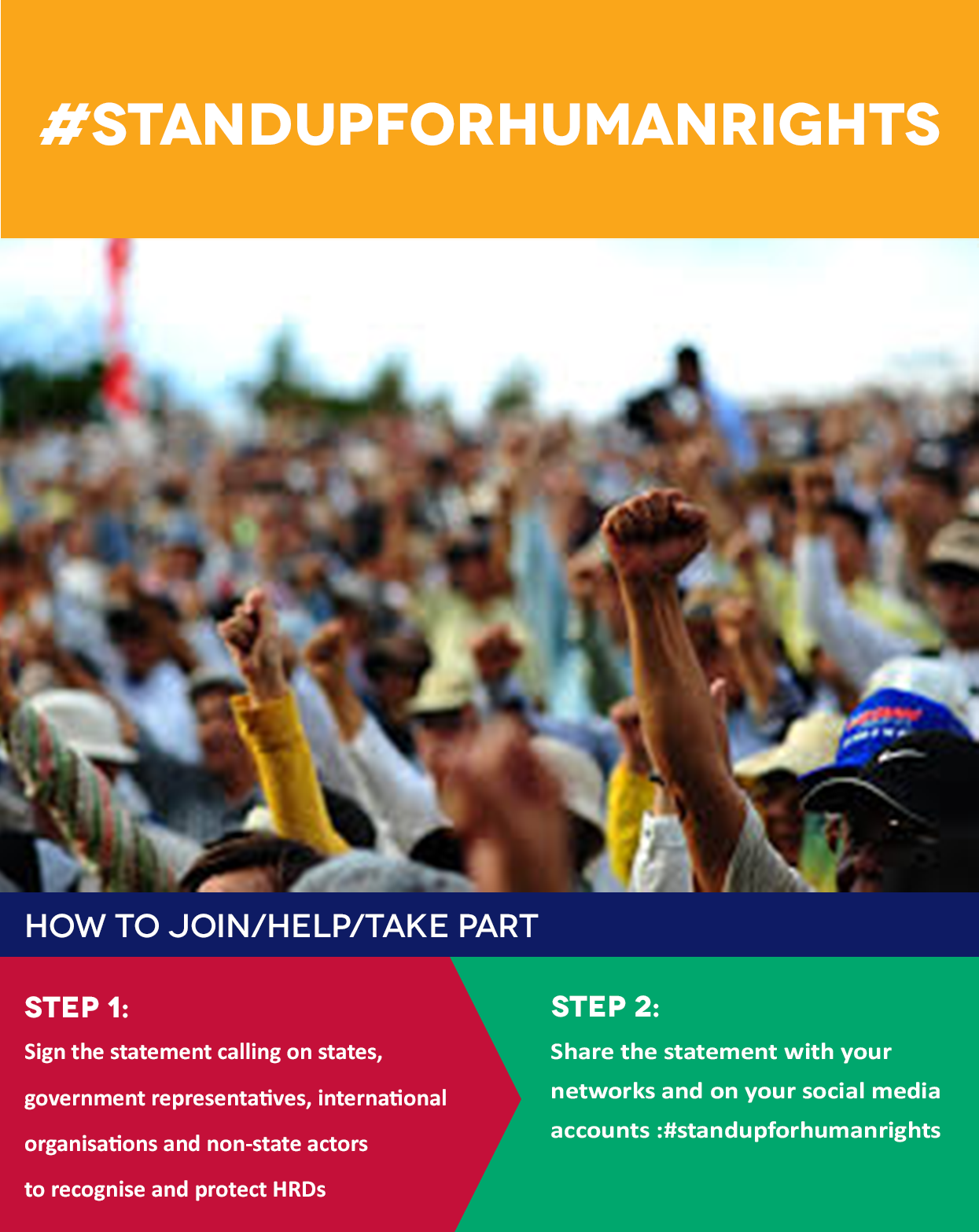 Statistics on HRDs who have paid the ultimate price for defending human rights are alarming and should be a source of concern to all of us. Global human rights organisation Frontline Defenders reported that in 2017 alone 312 HRDs were killed in 27 countries. Even though in almost all cases, the often-brutal killings of these HRDs are preceded by threats which are often reported to the authorities, pleas for help and protection are routinely ignored. Amnesty International sheds light on an estimated 3,500 HRDs killed over the last twenty years. In a majority of these cases the perpetrators have not been held accountable and they continue to attack others as they enjoy high levels of impunity.

HRDs are often victims of physical assaults, unlawful surveillance and are threatened by state and non-state actors. The offices and homes of some have been attacked to intimidate them and the movements of others are monitored by state agents. Others are handed travel bans particularly when they plan to travel abroad to attend meetings or conferences that focus on human rights. Many have been abducted or kidnapped by members of security forces or unidentified persons and some have been found dead. Many more have simply disappeared and have not been heard from again. Senior government officials subject HRDs to smear campaigns to discredit them and the work they do and this makes them vulnerable to attacks in their communities. Amidst this onslaught, HRDs have had to self-censor and others have fled their home and countries.

We are extremely concerned that, in most countries, the lack of effective police and judicial response to these killings, attacks, threats, harassment and intimidation suffered by human rights defenders creates a climate of impunity and encourages and perpetuates these violations. The inclusion of Goal 16 in the Agenda 2030 is a recognition by states that development and human rights cannot be separated. Goal 16 calls on states to protect fundamental freedoms in accordance with national legislation and international agreements. The human costs associated with these attacks on HRDs cannot be easily quantified but if states don’t take requisite actions to halt this onslaught, key targets of Agenda 2030 will be missed.

This is our collective call to states, government representatives, international organisations and non-state actors to recognise HRDs as important actors in nation building processes, respect their rights, support their work and protect them at all times.

The undersigned groups urge governments to create an enabling environment for HRDs to operate in line with regional and international human rights obligations and standards. At a minimum, the following conditions for HRDs working across all sectors should be ensured; freedom of association, expression and assembly, the right to operate from unwarranted state interference and the states duty to protect. In light of this we make the following recommendations.

Develop and implement a law that recognises the activities of HRDs, protects them and makes provisions for those who target them to be held accountable. Ensure that there are clear policies, guidelines or resolutions for the implementation of the law.

Create protective mechanisms that respond to the specific needs of HRDs. These mechanisms should be able to monitor and report on the situation of HRDs and make recommendations to repeal or amend laws and policies that are inconsistent with the rights of HRDs or place them at risk.

Carry out prompt, independent and impartial investigations into all cases in which HRDs have been killed, threatened, attacked, abducted, intimidated and harassed and ensure that those found guilty are held accountable and victims provided reparations.

Repeal or amend all restrictive laws and policies that are unjustly used to restrict the activities of HRDs so that they comply with regional and international human rights law and standards and prevent the harassment of HRDs.

Urge governments to carry out independent investigations into cases where HRDs have been killed, physically assaulted, intimidated and harassed for defending their environment, natural resources and communities against the effects of the extractive operations of businesses and ensure that those responsible are held to account.

Stop engaging in physical and legal attacks against HRDs who defend their communities and environment against incursions by business interests.

Ensure that human rights norms and standards guide the implementation of business ventures especially when this impacts on the environment, natural resources and lands of communities

Work with governments to ensure that adequate consultations are held with communities and HRDs before engaging in extractive operations that will lead to displacement of communities and impact on their sources of livelihood.

Prioritise civil society participation in decision making processes and open spaces for the participation of HRDs in their activities.

Work with civil society to make a case for people-centred multilateralism that reinforces the primacy of internationally agreed norms and human rights.

Speak boldly when HRDs are threatened, attacked, targeted or intimidated and condemn such actions.